Even though most of the documentation I have found on this issue states that you should not use the WSUS Administration console to make changes, as this can somehow desynchronize the delicate relationship between WSUS and SCCM, it is also necessary to use the console to run WSUS cleanups.

I would have thought it would have been in the Site Maintenance tasks, or under the tab for the SUP, but it isn't. If you don't do routine cleanups, you run the risk of SUP sync issues. Updates will be missing from SCCM entirely.

To Perform this process manually, open the WSUS admin console, go to Options, and then go to Server Cleanup Wizard 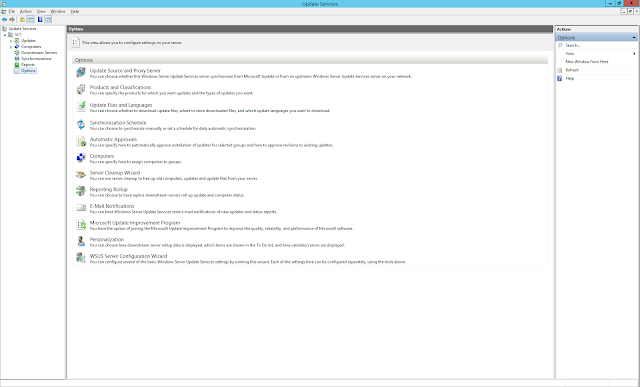 From here, you can choose to run the entire cleanup. I recommend doing one at a time unless you are using an actual SQL install. In my experience, the WID times out once it gets a bit bigger.

Your mileage may vary, but you may notice that your cleanup fails with the following error:
The WSUS administration console was unable to connect to the WSUS Server via the remote API.

In this case, you could keep running the cleanup until it finishes. Additional progress is made each time you run it, but there is no telling how often you will have to do this, especially if you haven't cleaned it recently. Alternatively, you could just have the script I put together below do it for you.


This would be the rough equivalent of manually retrying it every time it fails.

You will need to run this in powershell invoked with administrative rights. Once you verify that this works for you, this can easily be placed as a scheduled task on your server.
Posted by Devon Dieffenbach at 6:34:00 AM

Devon Dieffenbach
Former programmer turned SysAdmin. I seek to have a deep understanding of whatever it is I am working on, and I'd like to share that with others.